Ever tried to create a JSON data structure that includes entities that have a bidirectional relationship (i.e., circular reference)? If you have, you’ve likely seen a JavaScript error along the lines of “Uncaught TypeError: Converting circular structure to JSON”. Or if you’re a Java developer who uses Jackson library, you may have encountered “Could not write JSON: Infinite recursion (StackOverflowError) with root cause java.lang.StackOverflowError”. 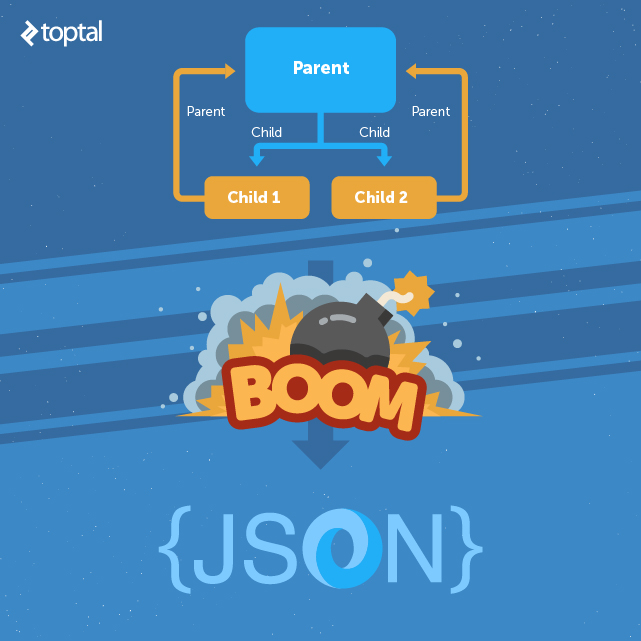 This article provides a robust working approach to creating JSON structures that include a bidirectional relationship without resulting in these errors.

Often, the solutions that are presented to this problem entail workarounds that basically side-step, but don’t really address, the issue. Examples include using Jackson annotation types like @JsonManagedReference and @JsonBackReference (which simply omits the back reference from serialization) or using @JsonIgnore to simply ignore one of the sides of the relationship. Alternatively, one can develop custom serialization code that ignore any such bidirectional relationship or circular dependency in the data.

But we don’t want to ignore or omit either side of the bidirectional relationship. We want to preserve it, in both directions, without generating any errors. A real solution should allow circular dependencies in JSON and allow the developer to stop thinking about them without taking additional actions to fix them. This article provides a practical and straightforward technique for doing so, which can serve as a useful addition to any standard set of tips and practices for today’s front-end developer.

A common case where this bidirectional relationship (a.k.a. circular dependency) issue arises is when there is a parent object that has children (which it references) and those child objects, in turn, want to maintain references to their parent. Here’s a simple example:

If you try to convert the above parent object to JSON (for example, by using the stringify method, as in var parentJson = JSON.stringify(parent);), the exception Uncaught TypeError: Converting circular structure to JSON will be thrown.

While we could use one of the techniques discussed above (such as using annotations like @JsonIgnore), or we could simply remove the above references to the parent from the children, these are ways of avoiding rather than solving the problem. What we really want is a resulting JSON structure that maintains each bidirectional relationship and that we can convert to JSON without throwing any exceptions.

Moving Toward a Solution

This approach will certainly avoid any exceptions that result from a bidirectional relationship or circular reference. But there’s still an issue, and that issue becomes apparent when we think about how we would go about serializing and deserializing these references.

So it looks like we need to stick with recognizing property values as object references. But this means that we will need these values to be guaranteed to be unique from all other property values. We can address the need for unique values by using Globally Unique Identifiers (GUIDs). For example:

So that should work, right?

Remember our original challenge. We wanted to be able to serialize and deserialize objects that have a bidirectional relationship to/from JSON without generating any exceptions. While the above solution accomplishes this, it does so by requiring us to (a) add some form of unique ID field to each object and (b) replace each object reference with the corresponding unique ID. This will work, but we’d much prefer a solution that would just automatically work with our existing object references without requiring us to “manually” modify our objects this way.

Ideally, we want to be able to pass a set of objects (containing any arbitrary set of properties and object references) through the serializer and deserializer (without generating any exceptions based on a bidirectional relationship) and having the objects generated by the deserializer precisely match the objects that were fed into the serializer.

Our approach is to have our serializer automatically create and add a unique ID (using a GUID) to each object. It then replaces any object reference with that object’s GUID. (Note that the serializer will need to use some unique property name for these IDs as well; in our example, we use @id since presumably prepending the “@” to the property name is adequate to ensure that it is unique.) The deserializer will then replace any GUID that corresponds to an object ID with a reference to that object (note that the deserializer will also remove the serializer-generated GUIDs from the deserialized objects, thereby returning them precisely to their initial state).

So returning to our example, we want to feed the following set of objects as is to our serializer:

We would then expect the serializer to generate a JSON structure similar to the following:

(You can use a JSON formatter tool to prettify any JSON object.)

Then feeding the above JSON to the deserializer would generate the original set of objects (i.e., the parent object and its two children, referencing one another properly).

Implementing the Serializer in JavaScript

Below is a sample working JavaScript implementation of a serializer that will properly handle a bidirectional relationship without throwing any exceptions.

Stay informed on our latest news!